7 Reasons to Use React Native for Mobile App Development 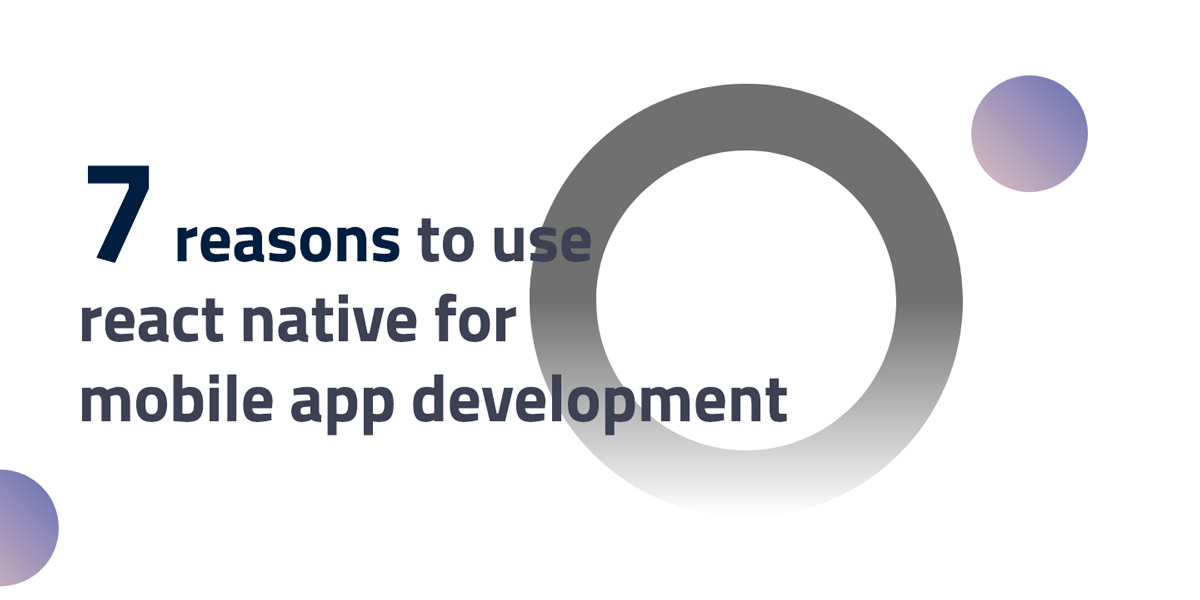 Considering the day-to-day evolution in the field of Web development across the globe, the marketplace is continuously flooded with software frameworks, new tools, libraries, and programming languages (such as JavaScript, Angular JS, Java, C#, Python, etc.) And hence, it has become really tough for the business owner, developers, and programmers to choose what would be best suited to a web development project.

However, if we talk about the last few years of the web development field, the fastest-growing framework among many others, the React JS i.e. React JavaScript has been found to have emerged for the development of mobile applications, web applications, and websites that are rich in functionality/features and user feedback by the reduction of web development costs.

React JS Framework – How Does it Benefit the Front-End Development?

Supported by front-end as well as server-side, created and maintained by Facebook and as said by React JS’s creator, Jordan Walke, it’s an efficient open-source JavaScript library used to deliver UI (like tab bars and reusable UI components) for front-end web apps that are quite simple, faster, responsive, agile and are scalable.

Since React JS has lets the developers modify data by asking for no page reload and develop huge web apps, with over 220,000 plus live websites including the industry giants such as Netflix, Apple, Paypal, etc. it is the most popular framework out there.

Here are the top 5 Key Benefits of Using React JSfor the Front-End Development:

Fast Performance: With a virtual DOM program along with server-side rendering, React JS framework helps with web development, which runs faster, and hence, this framework provides us with high-level performance.

Ease & Flexibility: When it comes to the React code, because of the modular structure it has, in comparison to the various front-end frameworks in the marketplace, it is quite flexible and can be maintained with ease. And hence, it’s helpful for businesses to not wasting huge chunks of money and saving time.

Web & Mobile App Development: Unlike many other frameworks that only allow website development, React provides the business owners with the development of websites along with mobile apps for both platforms i.e. Android & iOS. The biggest example of the React Native Android App Development or iOS development is Facebook.

React JS framework Usability: Learning the ins and outs of JavaScript is no difficult task, and a developer with a good knowledge of the React JS framework can use it quite easily for the web development process.

Development Speed: The React Native App Development Framework helps in boosting the development speed by letting the different developers write and use the app’s individual components on the server-side as well as the client-side.

Most of the developers, as well as programmers, look up to React Native App Development over various other web development frameworks available in the market for the following 7 Core Reasons:

With the utilization of downward data flow and structure of data binding, ReactJS ensures great app performance and doesn’t let the entire structure to get impact with even a slight change in an object. And hence, whenever a developer opts for updating and changing its state or modify an object, just those parts are impacted. And hence, ReactJS helps in further enhancement of application stability and reliability.

In the era of new technologies, programming languages, and new frameworks, React JS framework comes with a great set of developer tools that are helpful for boosting the overall performance. This toolset includes the tool of technology debugging, design tool, and more to be used for your current or next real-life project. To give you an example for the same, Facebook, in its framework, has been utilizing React developer toolset as well as Chrome developer tools.

Since React JS as a library (for example, V i.e. View in MVC pattern) is more attentive to performing individual tasks and is not a whole complex framework, in order to provide the user with a whole framework solution, it requires a JavaScript developer or programmer to utilize other tools. However, learning new tool basics and implementing them for the development of the web is no difficult task by using docs or tutorials.

The structure of an application has to be finalized before the development phase begins, especially while developing an app that is heavy and complex to ensure it doesn’t impact UI while making even small changes and performs well. And hence, Virtual DOM i.e. virtual representation of DOM function comes in play, which is tree-structured, and let’s testing and risk estimation during every change that’s made and further allows the high performance by the application.

A poorly build UI (User Interface) can impact the entire application performance for the app users badly. And hence, with a rich, high-quality UI (User Interface) creation by React JS, an app not only performs well but thrives in the marketplace, making it more user-friendly.

Although JSX is a syntax extension that isn’t a compulsion, with React, it allows the developer to add HTML bits to JavaScript, making it more efficient in overall performance because of the clean and easy writing of the components. Moreover, JSX helps in the development of high-volume applications.

Well, SEO (Search engine optimization) is no new term when it comes to web development. It plays a huge role in the success or failure of any app or website. Moreover, with React JS, the fast performance and rendering speed, it takes lesser time for the web page loading, and hence, it allows a higher Google search engine ranking and more users.

In the end, considering all the above benefits, and React JS being a popular, high-quality and simple-to-work-with front-end framework among the developers around the globe, is worth considering to be adopted during the web development project. So go ahead and make the right choice.

NextWhy Should You Go with Flutter to Build Your Next Mobile Apps Project?Next