Why Should You Go with Flutter to Build Your Next Mobile Apps Project? 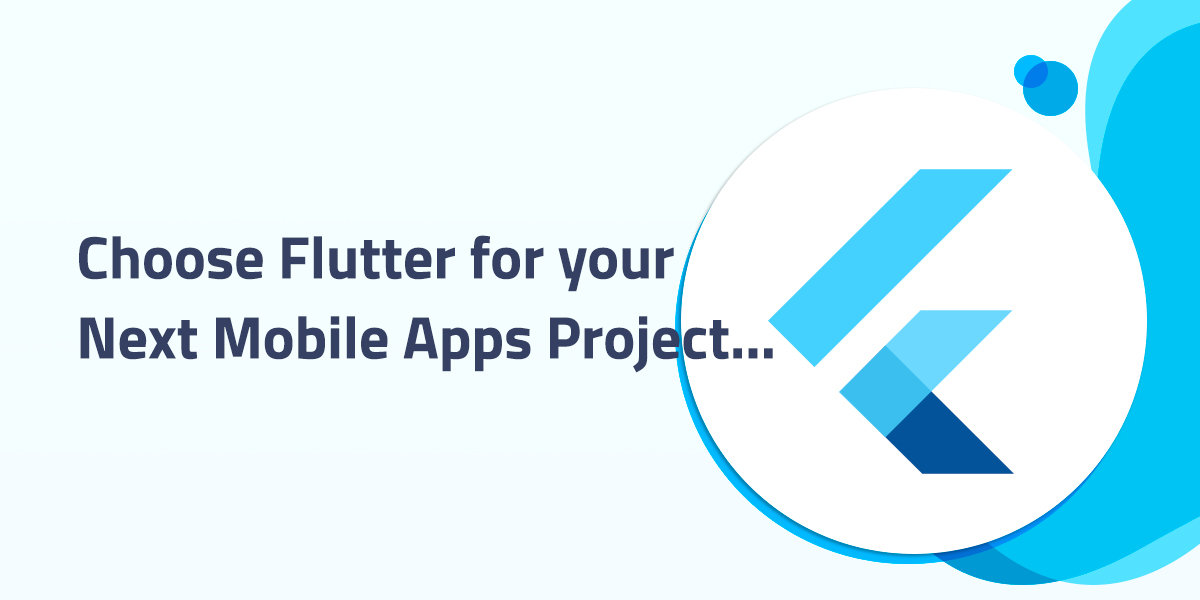 Mobile users, nowadays, usually have a notion of how one app should be serving them in terms of application’s Design, features, performance, technology, and more. And hence, for the app developers or programmers, it has become crucial for their designed/developed app to fulfill the user concerns keeping in mind the overall product quality. Moreover, this is when Flutter, which is developed by Google, comes into play.

Flutter is a Google’sGoogle’s UI toolkit that is used for building beautiful, natively compiled applications for mobile, web, and desktop from a single codebase. Initially, Flutter used to be a platform available at mobile phones; however, due to development in technology, these platforms have started working on other support webs and desktops too.

1. Flutter App development is Faster than Other Platform Solutions

In the earlier times of app development, a particular process used to take long hours to build in a simple process. The building of a simple layout with an app bar, a floating action button, and a hamburger menu was very time-consuming. It nearly took 5 minutes to write and run that Code but with Flutter, you can do that in just one minute and eleven seconds.

The developers initially would spend hours and hours on coding and testing. However, Flutter has helped them to make the process faster and has enabled them to save time and to increase efficiency further. And hence, to make the work exciting and creative, the developers should love the work they perform.

Moreover, Flutter is a widget, and hence, it does not need any bridge between the cross-platform codes like the Android and iOS in order to render features and services that are essential to building an app. The fact that the other platforms need a bridge to process slows down the speed of the processor. Flutter, with the help of its own engine, processes without any bridge, making its process fast and smooth.

Considering equipped with platform layouts, Flutter is found to be useful in creating an application with a unique as well as impressive User interface (UI). Moreover, the app developers are able to put in their expertise with the help of Flutter’s reactive framework and rich library, which includes various layouts in order to be more creative and productive. Moreover, the API availability further allows the developers to display their expertise in animation, as well.

3. The Flutter Helps the Developer to Develop an App that looks exactly like its Design

Once an app design gets approved to be developed, the app developers are expected to build an app that was presented in the first place without any flaws and changes, which basically happens out of platform limitations on Android and iOS. Moreover, it is difficult always to build an app that is precisely similar to the app design presented at the initial stages of app development.

In the case of Android and iOS platforms, there is a certain limitation that makes it challenging to build an app that is exactly similar to the Design. In the case of Flutter, it provides you a platform where it is not restricted by limitations and enables you to replicate your Design without any compromise.

Flutter can help a developer create an app with an impressive interface, which is highly-responsive and looks natural when it comes to its overall Design. Moreover, with the use of Cupertino for iOS and Material Design for Android, Flutter ensures the development of an application, which is accessible, responsive, and user-friendly for users. However, further code re-use gets rid of any development process difficulty.

5. Single Code for the Front end as well as Back end

In order to code for the mobile app development, Dart, which is basically a programming language that is client-optimized, is utilized for Flutter. Created by Google, Flutter uses the reactive framework and works on multiple platforms in order to develop mobile, web applications, etc. with the use of Dart as its single code language for the Front end as well as Back end.

Considering the above benefits of opting for Flutter mobile app development, the Flutter has definitely come out to be a way better option than the other platforms available at present in order to create a mobile app seamlessly. One can use Flutter provided by Google as it does not require any bridges and functions faster than others. Moreover, the app has no or very few limitations making the app building process smooth and easy.

Other than that, it further helps to cover the path of replicating the Design on the paper to the app that you need making you efficient and creative in your work.

PrevPrevious7 Reasons to Use React Native for Mobile App Development
NextInternet of Things – What it is And How is it Useful?Next