Node js: What Makes It Futuristic Platform for Development? 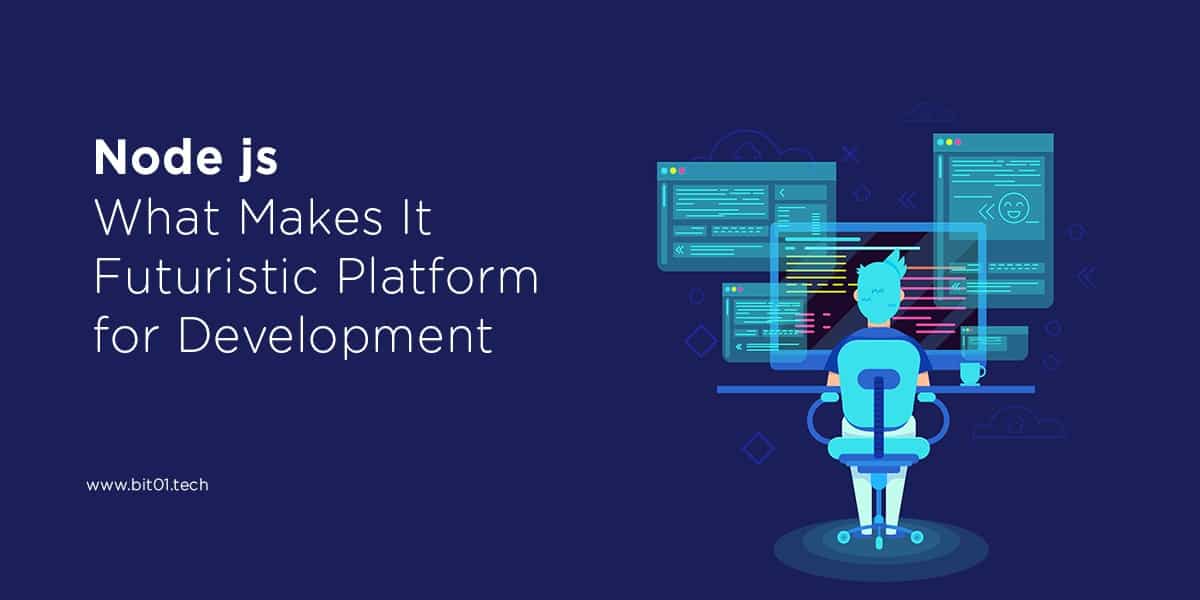 Node.js has been the preferred choice for software developers. Even the back-end developers have realized the value of Node.js. Whether you need a web app, mobile app, real-time app, or even a CRM, Node.js has the potential to transform your ideas into reality.

Over the past decade, there have been numerous programming languages that were created to benefit software and product developers. Many of them got fame and glory but couldn’t last the distance due to some platform limitations.

In the last few years, one of the most reliable technologies has emerged for creating scalable applications. The name of this technology is Node.js, and is here to stay for a long time. It is the future of product and software development.

What is Node js?

Many individuals have the misconception that Node.js is a programming language. However, this is not entirely true. Node.js is an open-source, cross-platform JavaScript runtime environment supported by the Google V8 engine. It empowers a software developer to use JavaScript to write command-line tools and server-side scripts outside the browser.

With the use of Node.js, a product developer can launch both front-end and back-end of web apps using JavaScript.

In addition to being efficient and flexible, the lightweight nature of Nodejs has made it extremely popular for custom web development. It also has an extensive library of JavaScript modules that makes things relatively simple and convenient for a Node.js developer. According to Statista, Node.js was used by more than 50% of software developers globally in the first half of 2020.

Node.js back-end empowers some of the largest brands around the globe, such as LinkedIn, Uber, Netflix, PayPal, Groupon, and many others.

Why Node.js considered the future of development?

Node js has a massive ecosystem of tools and features. It provides a plethora of benefits to software developers and CRM developers, therefore making it a preferred choice for many. The various advantages of using Node.js for executing any software development project ensure that Node.js developers’ future is bright.

Node.js functions on Google’s fast V8 engine, thus making it the front-runner for any software developer in today’s world. The Node js platform makes use of a single thread that eliminates the hassles of creating separate strings. This makes the apps built using Node.js extremely rapid and seamless in performance.

Scalability is a crucial factor that has been incorporated into the core of the Node.js platform. A Node.js developer finds it extremely easy to scale up an app horizontally as well as vertically. A software developer can add new nodes to the existing horizontal scaling system, while in vertical scaling, additional resources can be added.

Node.js is a robust ecosystem having a rich JavaScript library of different modules making things remarkably straightforward for a Node.js developer. The ready-to-go Node.js applications help a Node.js developer to save much time and enhance the performance of the apps as well.

Node.js allows a software developer to create the front-end and back-end applications in JavaScript using a runtime environment. Node.js makes it possible to quickly share a single programming language both on the client and server-side.

In today’s highly competitive environment, time is valuable for both businesses as well as software developers. Being lightweight, Node.js enables a product developer to shorten the time-to-market cycle. This translates to faster app deployment and deployment.

To leverage all Node.js’ benefits, it makes sense for you to hire a Node.js developer for creating web apps. Experienced Node.js developers can also build a complete CRM solution using this platform.

With the flexibility, adaptability, and top-notch execution shown by Node.js, it has become developers’ and companies’ preferred choice. It has been moving forward to the top position in the development industry.

It would serve as a stable solution for emerging trends such as artificial intelligence, cloud computing, IoT, AR, VR, SaaS, PaaS, and many others.

To leverage the advantages of this powerful, multifaceted development technology, you will need to hire Node.js developers. We, Bit01, offer resource hiring. Let’s discuss your project in detail. For more information, get in touch.

PrevPreviousCOVID 19: Transforming the Grocery Business in the USA
NextHow to Calculate the Estimate Budget for Flutter App Development?Next